Drivers and Their Pets: Meet Aaron and Molly January 2 2019

We recently hosted a contest for drivers to submit their cutest furry co-pilot. Our first-place winner, Aaron Hatfield, submitted his sweet dog, Molly.

Aaron, a K&J professional driver, had been looking for a dog to keep him company in his truck for awhile when his sister, a veterinarian, reached out.

A young couple had recently dropped off their three-month-old puppy at her office. The puppy was blind and had a broken leg, and the couple was unable to handle the financial burden.

"It seemed like they'd bit off more than they could chew so they left the puppy with the vet," said Aaron.

According to Aaron's sister, the puppy was perfect for life in the truck.

“She said, 'Look, this is the situation, this dog needs to be somewhere confined and with people all the time, like in a truck.'" said Aaron.

Suffering from both blindness and limited mobility, the truck life was truly ideal for the puppy. Aaron adopted her, and named her Molly.

"I actually got the name from a cyberpunk/sci-fi book I was reading at the time, called 'Neuromancer'," said Aaron. In the book, a character named Molly is described as having glassy, almost mirror-like eyes.

Aaron doesn't know Molly's breed, but a miniature poodle or red poodle is his best guess.

"She’s a little tiny dog, and she does good in the truck," he said.  "For some reason she really prefers women. If I go to K&J, she’ll bark at the guys and the drivers out in the shop, but when we go into the office, she runs to go see Brenda and Shelley and Cathy and Jennifer and they think she’s the sweetest dog. But in the shop they think I have the most annoying dog."

Because Molly is mostly blind, she's nervous about walking too far on her own or jumping down off the truck seat. It's a trait that makes her the ultimate truck dog. 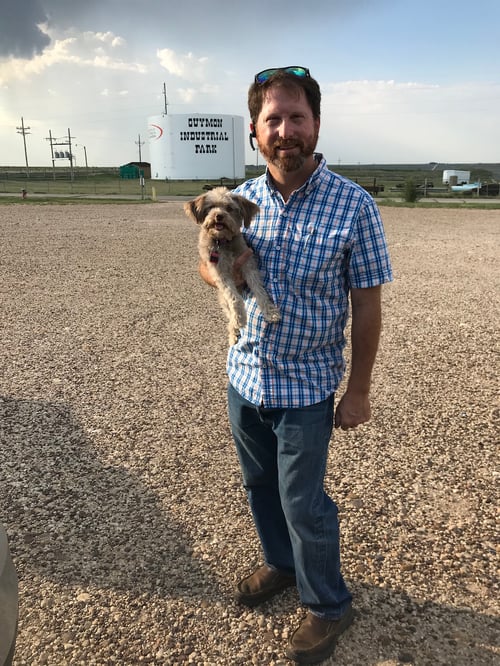 Since she's blind, Molly isn't much for tricks or commands.

"The only real command she knows is 'Look out!'" said Aaron. "I have to be able to make her stop so she doesn’t walk into a grate or off a sidewalk."

But that doesn't mean Molly isn't a fun and playful pup. According to Aaron, she really enjoys hanging out with other dogs.

"She wants to be buds, but they're all moving pretty fast," he said. "my mother-in-law has three dogs, and the head dog is always trying to herd the others. But since she's blind, Molly doesn't quite get that she's being herded. This little dog just won't be herded, and the other dogs think she's being stubborn."

All in all, Aaron and Molly are the perfect team.

"Her job is to bark at the DOT guys doing the inspections," joked Aaron. "She's a pretty faithful dog."

Many of our drivers enjoy the company of pets on the road. Check out our profile on driver, Scott, and his dog, Mika!