What Is It Like Being in The National Truck Driving Championships?

K&J driver, Bob Hoffman has been at the National Truck Driving Championships 7 times since 2004, and this is his fourth time competing for K&J Trucking. Before you write that off, consider that there are only 8 competitors chosen from each state! And did we mention that he is 67 years old? While he is away at nationals we thought it would be fun to overview what it is like competing in the national championship!

In order to compete you have to be a full time truck driver who has worked for your employer for at least one year and driven actively for 11 out of the past 12 months. You must also be accident free during the past year. It does not matter if you were at fault in the accident or not, anything on your record will disqualify you. To compete in Nationals you must win your class/division at the state level first.

There are eight different divisions at Nationals which correspond to the eight divisions at each state level. Hoffman is currently competing in the Five-Axle Tractor (Sleeper Cab) -Semitrailer (Van) division.

2. How the Championship Works

The championship is based on your overall score from three different events. There is a written test, a driving test, and a pre-trip inspection. Your overall score is what determines your standing in the competition, so every point counts.

Several months before the competition each driver is given a copy of a book called Facts for Drivers. This book changes from year to year. Drivers use the book to study for a 40 question written exam. During the exam all the drivers in a given division sit in a room silently and have one hour to answer all the questions. The majority of the questions are multiple choice, some are true or false, but all are designed to be tricky.

Before competing in the driving portion of the championship there is  an orientation to the course. Hoffman said, "They walk us through the course with no talking allowed. In fact, you will get docked points if you talk. I see some people start the course with 25 pts deducted because they can’t keep their mouth shut! We are allowed to ask questions once the overview is complete, but they don’t want to hear the same question twice so you have to pay attention and take notes." 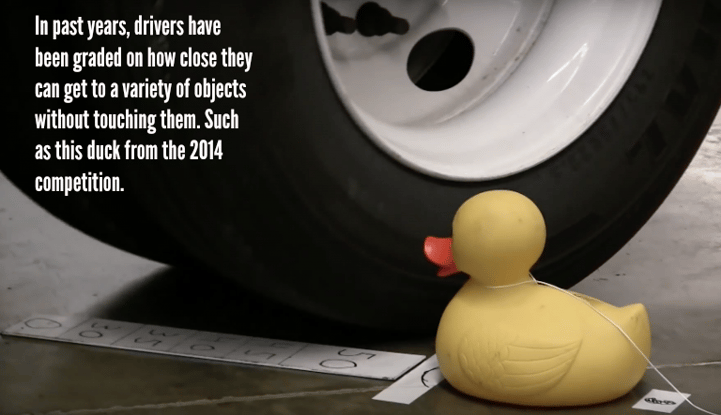 In the driving test competitors are awarded points for their ability to manuever a truck through a series of obstacles. The test, surprisingly, takes place indoors in a large arena. In several of the obstacles points are awarded based on how close you get to an object without touching it. In order to get top marks you need to be between 0-3 inches from the obstacle! Essentially you are scored on how accurately you can stop the truck.

For the pre-trip inspection, a tractor and trailer is set up ahead of time with a variety of issues such as leaking fluids, broken lights, or even simulated cracks in the frame. During the inspection the driver has from 7-9 minutes to assess the complete physical condition of the truck and its compliance to rules and regulations. At the start of the competition they will tell you how many major and minor errors you can expect. On any given truck there will be between 10-20 errors to spot. 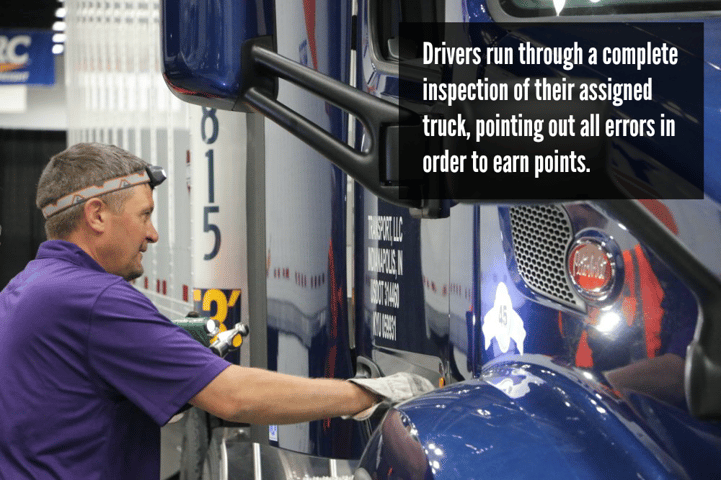 As the driver inspects the truck they are followed by both a time keeper and a scorekeeper. Both will be silent throughout the competition except to give you a one minute warning when your time is running out. When you notice an issue with the truck, you mention it to the scorekeeper who then makes a note.

"I love attending the National Truck Driving Championship because of the surrounding competitors. We all have a shared philosophy that we care about our work and our image to the public. Now, some people take it VERY seriously to the point of obsession. My view has always been that I will do the best I can but also try to have some fun while I’m doing it.

It is hard to put it into words, but being a part of the National Truck Driving Championships is a moving experience that will stay with you for the rest of your life. For the first year you’re in it if you come out with 30th place you’re doing well. Well, my first year I got 16th place and I was overjoyed. I think the experience and the camraderie is worth all the time that you spend on it. It is kind of like a vacation that renews your love for trucking.

I'm hoping a new crop of younger K&J drivers springs up to take the reins from us older ones. I would love to see K&J continue to lead nationally. So if you are interested in competing and you are a K&J driver, contact Jennifer Raddatz for more information on how to prepare for the 2018 season."

K&J Trucking is all about excellence, in our staff, in our treatment of drivers, and in our service. Learn more about what makes K&J different.

The Scientific Explanation for Why You Are Addicted To Trucking

Craving This? Eat That!