I'm just your average car driver, or in trucker lingo, a four-wheeler. But I recently went OTR to learn more about what it is truly like on the road. Before my trip with Summer I felt like when I was in my car I owned the road; I quickly learned that I had just been borrowing it from a big rig.

When you are driving 80,000 lbs down a highway at 68 mph, you are definitely the king of the road. Most four-wheelers assume that when we are inconvenienced it is just because truckers are jerks. But I learned, they are usually "jerks" for good reason.

Why Truckers Are Jerks

1. They Won't Drive the Speed Limit!

The most efficient pace for most trucks is about 65 mph. It is the perfect balance of highway speed while maintaining better fuel mileage.

For this reasons, many drivers (or companies) put speed limiters on their rigs. This helps drivers stay safe, avoid speeding tickets, and maintain good fuel mileage.

2. They Block Both Lanes on the Highway!

If you ever see two trucks next to each other on the interstate driving side by side for miles, chances are it is due to those speed limiters I just mentioned. While drivers should hang back to let faster traffic go on the left, some truckers have the mentality that they are going to go their max speed and the rest of the world can just deal with the consequences. Don't judge all truckers by these few!

3. They Won't Get Over to Let Me Merge Onto the Road!

First, they aren't legally obligated to move. I know, this probably a shock, but technically merging puts the onus on the vehicle entering the roadway. If the road is busy, it would be much more dangerous for a truck driver to change lanes and risk hitting someone in their blind spot.

What about those truck drivers that won't slow down to let you merge? Slowing down that much weight traveling at 70mph is not a fast task. It isn't that they don't want to let you in, but they physically can't slow down to your speed in enough time. Another reason that truckers don’t brake to let you merge is that doing so put the four-wheelers behind them at risk of running into the back end of the trailer when the truck brakes quickly.

If you drive a non-commercial vehicle, please, on behalf of my friend Summer, do yourself a favor and work your way up to full speed by the time you are ready to merge and make sure YOU yield to oncoming traffic.

4. They Wouldn't Go At the Green Light!

If a trucker knows they don't have the time to get through a light before it turns red, they may start to slow down or even stop for an upcoming green light. They may even stay put when the light turns green if there isn't room for them on the other side of the intersection.

This is a tough spot for drivers, and one that I experienced with Summer. Drivers are often forced to choose between staying stopped at a green light or risking blocking an intersection. Either option makes them feel like a jerk and makes 4-wheelers give the 1 finger howdy.

5. They Put on Their Turn Signal And Try To Get Over When I Am Next To Them!

Ever been in the left lane when a truck you were driving next to suddenly put on their signal and started getting into your lane? I know I have; and now I know why. I, the driver of a car, was staying in the trucker's blind spot. There is no way they could see me in their mirrors and to them, the lane appeared clear.

If you're a four-wheeler, do yourself a favor and avoid staying in the No-Zone. Truckers aren't jerks, sometimes they just can't see you! 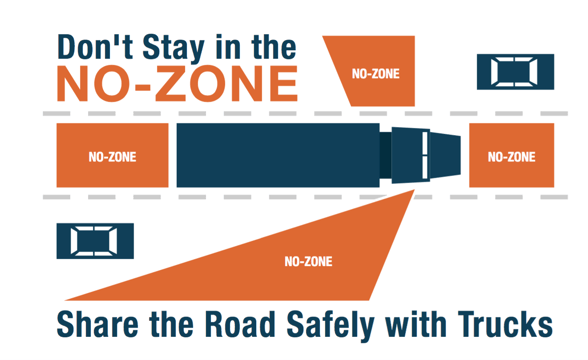 6. They Refuse to Drive a Consistent Speed!

Most drivers enjoy driving at consistent speeds because it helps them avoid tickets and stay on track for delivery times. If you see a truck that is slowing down and speeding up a lot, look around you before passing judgment. Is the land flat or hilly? For trucks that are fully loaded with freight, climbing a small hill can cause a dip of 10-15 mph in their speed, even when on cruise control. There is only so much truck drivers can do to get that much freight up the hill. Have patience.

7. They Swerve Their Back Tires Around Like Crazy For No Reason!

Some truckers refer to this as wiggling your tail. What is a car driver's reaction to this? Hanging back! That truck driver could be drunk! Or high! Or exhausted!

Or...they could just want to change lanes and you've been ignoring their signal for a mile.

And while this isn't necessarily a great practice, truckers sometimes have to give their rig a gentle wiggle so the cars behind them take them seriously and let them change lanes. Please note, we aren't condoning the practice, just explaining it!

8. They Flash Their Lights at Me!

Sometimes when a car passes a truck, the trucker will flash their lights at them. This is most common at night, but can also occur in the daytime. The most common reason is that the trucker is letting the 4-wheel driver know that they have cleared the front of the truck and have room to get back over into the trucker's lane. Far from being a jerk trucker move, this is actually courtesy and is something trucks often do with one another.

Why in the world would a truck park on the on-ramp when there is a perfectly good gas station just 10 miles away? Well, there are tons of possible reasons. On-ramps are much safer for trucks than off-ramps because vehicles passing by are going at much lower speeds. Drivers don't usually choose on-ramps as a first choice, so here are just a few scenarios that could have landed them there.

Please note, while it is occasionally necessary for trucks to park on the on-ramp, it isn’t a good idea if there is ANY other option. It is illegal, even if it isn’t enforced.

What I Wish Other Four-Wheelers Knew

Truckers aren't jerks, they just have unique working conditions that happen to impact all of us. So the next time you see a trucker being a "jerk", just remember that they also keep you safe, fed, and clothed.

Are you a "jerk" trucker looking for a trucking company that understands the tough demands of the road? K & J Trucking is the real deal. Family owned and operated, K & J takes supporting their drivers and independent contractors very seriously. Find out what makes us different.