Jean Gum, wife of K & J owner operator Joe, didn't expect to be shocked by much when she went out on the road with her husband. Joe has been driving for nine years and has always shared a lot of stories with her. But after spending three days and two nights out with him last year, Jean got to see what life on the road was like first hand, and there were a few things that she was surprised to learn.

1. You get a new perspective from riding up high.

From the cab, you can see down into other vehicles, even right onto their laps! “You see everything,” Jean said. “I mean, you know it happens but, wow, there are a lot of people on their cell phones and gadgets. Even when you are passing them in a semi, they aren’t even focused, they are just looking down at their phones.” And although Joe hates driving over bridges, Jean was in awe when they crossed the Mississippi River. She has driven over it before, she said the vantage point from the truck was amazing.

2. There are a lot of women truckers.

Jean knew there were quite a few women who drove truck, but she saw way more than she thought she would. She recalled: “I would say to Joe: ‘oh look, another wife is on the road.’ And then she would jump right into the driver’s seat!” 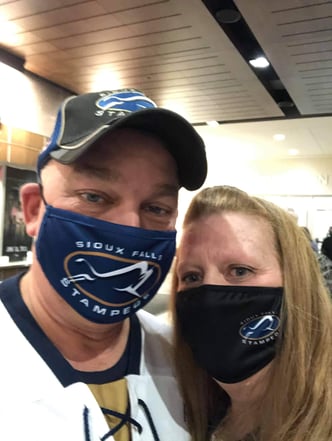 Outside of the industry, many people don’t understand the skill and sacrifice that truckers have and make. Jean was impressed that Joe could drive for so long, remaining awake and alert for many hours. “I also came to the realization that so much is dependent on the trucks, and now with the coronavirus… without truckers we are all in a world of hurt.”

4. There is so much more to it than driving.

Jean didn’t realize all the extra work that went on behind the scenes. “I learned so much about paperwork, and what to check the trailer for. Also what to do inspections on, and when to wear the yellow jackets to get things done.”

Because they spend so much time on the road, truck drivers have seen some pretty crazy sights. And Jean got her own special treat while out with Joe: “I got to see a Huey helicopter being hauled by a semi - for the president!”

Jean said Joe had so much fun watching her get in and out of the truck, and that he would laugh and give her a hard time. She told him, “I don’t do this 50x a day like you!” She learned there was definitely skill involved, and admitted she was very careful because she didn’t want to fall. “Joe just jumps in and out like it’s nothing. And he’s doing it with one arm! I, on the other hand, need a solid minute to get in or out.”

7. There are special bathrooms for professional drivers.

She wanted to get the full OTR experience, and part of that was taking a shower at a truck stop. But she didn’t realize that some truck stops had private bathrooms for truck drivers that were not open to the public. “It was a nice shower! It had its own toilet, vanity, and a nice big shower head. And plenty of hot water,” she said.

8. The sleeping arrangements take some getting used to.

The twin pull down bed made for cozy quarters when it was time to get some sleep. But it was the noise at some truck stops that proved to be the hardest adjustment for her. “There is just a lot of noise when you are trying to sleep; the trailers running, trucks going in and out around you,” she said.

9. Loads can be surprising.

For example, Jean learned that Joe has hauled burritos to Texas, and cheese from South Dakota to Wisconsin. “I’m sure there is a reason, but it didn’t make sense to me!”

Jean said one of the places they stopped was the Iowa 80 Truckstop, now known as the World’s Largest Truckstop. Living up to its name, she said there were hundreds and hundreds of trucks there, “and the fact they can all park so close together is such a skill!” She was amazed to find this truck stop had a movie theater, dentist, chiropractor, barber shop, a section full of gear you could customize, and more!

11. She could never be a truck driver.

Jean loves how much Joe loves being a truck driver, but admits it’s something she could never do. Part of the reason why, she says, is because she drinks coffee all day long and would need too many bathroom breaks!  Another reason is that she is so extroverted, it would be hard for her to be solo on the road for so long, and don't forget about her and Joe's adorable grandson!

But Joe loves to make new friends, and will sit at the counter at truck stops to share a meal with other drivers. He said it was great to have Jean there to talk to while on the road, especially at the truck stops or when he’s done driving for the night.

Overall, Jean loved her time on the road, and Joe loved having her along for the ride. They enjoyed doing crossword puzzles together and discovered that “independently we are not that great, but together we were pretty good!” And after watching Joe back up the 53 foot trailers, Jean realized “how ridiculous it was that I used to guide him when he was parking the boat in the driveway!” Jean would love the chance to get back on the road with Joe, especially if they could head to the Northeast, which is somewhere she has never been.

If you're interested in learning more about what K & J has to offer to driver (and their families), we would love to talk and see if we are a fit!