We are excited to announce that K&J's Dan Cameron has been awarded the South Dakota Trucking Association's prestigious Truck Driver of the Year award for 2018. Two other K&J drivers, Josh Becker and John Snowe (pictured below), were also honored to be finalists for the award.

How it is Awarded

Each month a committee of trucking executives looks over submitted data from companies all across South Dakota to pick a driver with the best numbers, and attitude, to be the trucker of the month. At the end of the year these drivers each have a chance to compete for the title of Truck Driver of the Year by coming to the SDTA's annual meeting and participating in face to face interviews. These interviews are conducted by a team of three individuals: a state trooper, an insurance representative, and an administrator from the SDTA.

As all twelve drivers stood in front of the stage the presenter began by sharing the bio of the winning driver, all without mentioning names.

"When he got a few sentences in I realized that it was me; I had won," Cameron said. "It was an unbelievable experience." 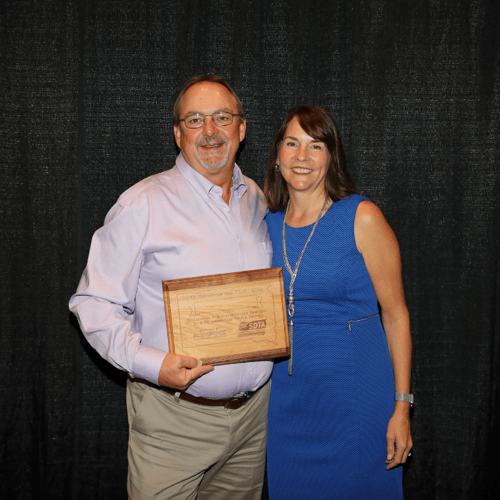 Trucking is often a thankless job, making this award even more meaningful. “In all the years I've been trucking, it is so fun and cool to finally be recognized," he said. "I'm very proud of this accomplishment."

Cameron has been involved in the trucking industry since the age of 18. He started in Canada and then moved to the US and has driven here for 36 years.

"I'm very proud to say that I've logged 4,000,000 miles accident free," Cameron said. "I've never even hit a deer." Cameron then joked that while he used to knock on wood after that statement, he no longer does. "Don't get me wrong, I've come close several times," he said, "I've just been blessed to stay safe."

Shelley Koch, K & J president was there when Cameron won. "I couldn't believe it either," Koch said. "There were absolutely amazing competitors in this year and for Dan to win was a very big deal." Koch was proud that this year, for the first time, K & J had three drivers in the running. "In my book they are all winners," Koch said. "We have excellent drivers at K & J and it was wonderful to display that to the greater trucking community in South Dakota."

Cameron, while still basking in the excitement of his award, wanted to express his gratefulness to K & J for their support, “I’ve been at K & J for 13 years and they are by far one of the best trucking companies I’ve ever worked with. Shelley and her whole team are so supportive.”

Looking to join an amazing team of professional drivers? We are looking to expand our fleet! Click below and start the conversation!